This paper is a contribution to Meaning in the History of English: Words and Texts in Context, which is a volume of proceedings of the 17th International Conference on English Historical Linguistics, University of Zürich, August 2012.

Adverbial clauses and their position in sentences

While there are a number of studies on the positioning of adverbial clauses in sentences in contemporary English, those discussing the same issue in the history of English are not numerous. This paper discusses the ordering of some adverbial clauses (if, though (although), when, because (be cause), till (until)) and the main clause in the Paston Letters in Middle English. It considers various factors such as information structure, the length of adverbial clauses, and also deals with subordinate clauses within subordinate clauses, highlighting mainly the continuity between Middle and Modern English.

カテゴリー
book chapters and other articles、Publications

book chapters and other articles

“Cognitive Aspects of Negation in The Tale of Melibee, The Parson’s Tale, and A Treatise on the Astrolabe” 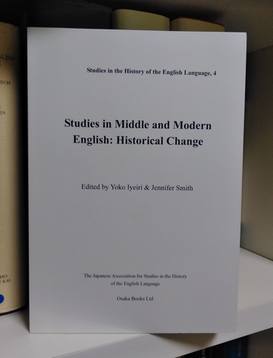