Also collaborating with some of my students, I have some other projects, most of which are at the beginning stage: early Middle English homilies, missionary documents in Hawaii, and contemporary English in some British newspapers.

I have been woking on Benjamin Franklin’s English, focusing on some stylistic features in his letters and autobiography. I have read a paper on negation in his English at the Fourth Asia Pacific Corpus Linguistics Conference (19 September 2018, Takamatsu, Japan), and its PDF is available in the list of my publication.

Some projects based on Early English Books Online

Some of my projects are based on EEBO, either in its original form or in the form of the EEBO Online Corpus at various internet sites. Some of the lingusitic features I have investigated are: the complementation of the verb forbid, convince, etc.; the addition of –s to always and its relationship to algate(s) in Middle English.

Also Ryuichi Hotta at Keio University and I have been woking on etymological spellings in the Early Modern English period by use of the EEBO Online Corpus.

I have been working on some late Middle English texts, focusing on various linguistic features. Texts include the Paston Letters, Hereford MS P.l.9., etc.

Also collaborating with Mitsumi Uchida, I have been working on various texts published by William Caxton. We have published some papers on The Dictes and Sayings of the Philosophers and Paris and Vienne. See the list of my publications.

This project is continuous. Collaborating with Michiko Yaguchi at Kanazawa University and Yasumasa Baba at the Institute of Statistical Mathematics, I have been exploring discoursal techniques used in spoken interactions in contemporary American English by use of the Corpus Spoken Professional American English.

This project has reached completion. Mayumi Taguchi and I have collaboratively edited the second item of MS Pepys 2125 and published Pepysian Meditations on the Passion of Christ: Edited from Cambridge, Magdalene College, MS Pepys 2125.

book chapters and other articles

“Ys the Lorde amonge us or not?: Some Observations of or noon, or no, and or not in English Bibles and their Historical Development” 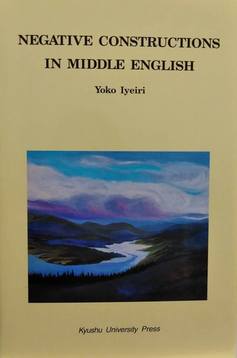